The story goes that Hugo R. Ensslins, the former head bartender of the Wallick Hotel in New York, created this classic in 1916. In addition to the conventional gin sour, he added crème de violette and maraschino, and the aviation was born.

Pour in 5 cl and fill up with Organics Tonic Water 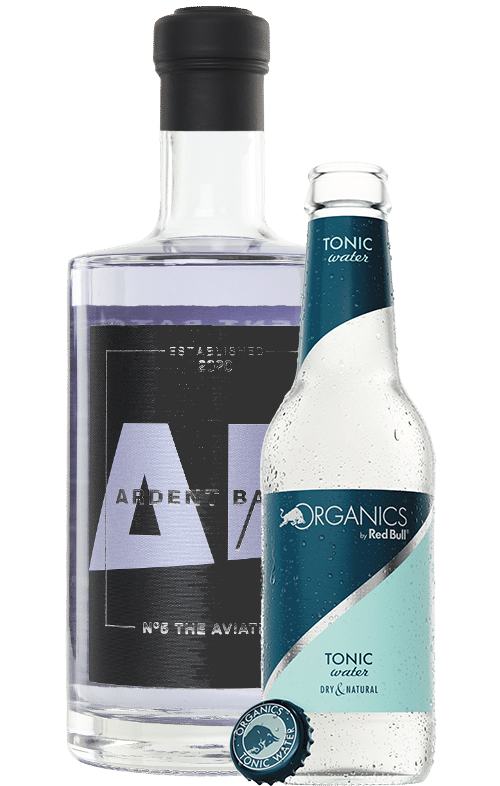 Costs can be recorded in the cash register to the nearest cent. The table of measurements enables immediate status control in the restaurant or in the stockroom.

Anyone can use it – regardless of whether an intern, apprentice, chef de rank or bartender. The guests always have a consistent, positive experience.

Guests can take the cocktail experience home and enjoy it with friends. They will tell of their visit to your location at the same time.

Take a shaker and fill it with ice cubes. Ice not only cools, but also combines the melted water with the liquid through the shake movement, so that as a result a perfectly tuned aviation.

Add 8 cl of our Pre-Batched Aviation Cocktail to the ice-filled shaker, shake vigorously and then strain into a coupette or martini glass. Enjoy chilled without ice.

We recommend our No 5 Aviation as a long drink with tonic. For this, take a highball glass and fill it with ice cubes. Then add 5cl of the Aviation and pour with tonic. Now just stir briefly, garnish with lemon zest and enjoy a wonderfully light gin & tonic variation.

The ingredients of our N°5 The Aviation

According to the stories, Hugo R. Ensslins, the former head bartender of the Wallick Hotel in New York, created this classic in 1916. In addition to the conventional gin sour, he added crème de violette and maraschino, and the aviation was born. In reference to aviation, which emerged at about the same time and its sky-like color, the cocktail was christened Aviation (English for aviation).
Due to the composition of a basic spirit, an addition of citrus as well as a part of sugar, this drink belongs to the category of sours, more precisely to the International Sours. The group of sours is classified into several subgroups. On the one hand, there are the International Sours, which include the New York Sour, New Orleans Sour variants, and on the other hand, the famous Fizz and Collins variants. While New York Sours are distinguished by the addition of red wine, orange liqueur gives the New Orleans Sour its unique flavor. The most famous sours are certainly the Daiquiri, Tommy’s Margarita, Cosmopolitan or the Gin Fizz. One ingredient often found in Sours variations is egg whites. This becomes a creamy liquid when added to the shaker and shaken vigorously, literally crowning the drink.
The base spirit, as already mentioned, is the gin. A London Dry Gin is used here. London stands here not as often assumed for a designation of origin, but for the way in which the gin must be produced. For example, the addition of sugar is recorded by law. No more than 0.5g per liter may be added.
Other types of gin are the Distilled Gin, the Dry Gin and the Sloe Gin. Further distinctions are made according to geographic location. Well-known varieties here are, for example, the Plymouth Gin or the New Western Dry Gin.
The history of gin begins in the 12th century, when Italian monks learned the art of distilling spirits and began to use alcohol as a base for medicine they developed. Many of these medicines were based on the healing properties of juniper berry. This already shows the flavoring of alcohol with juniper berries.

But the real success story began in the 15th century with Dr. Franciscus Sylvius de la Boe, who combined alcohol with juniper berries to cure kidney ailments and tropical fever suffered by Dutch settlers in the Dutch East Indies. He called his invention “Genievre”, the French word for “juniper”.

It wasn’t long before gin was able to overcome the counter of the pharmacy and conquer a permanent place on the bar tables – and as a drink at that. In addition, the name was shortened to “Genever” or “Jenever”. The British troops, who fought in Holland in the 17th century, took the “Genever” with them to England and simply called the drink “Gin”.

In the 18th century, taxes were raised on all imported spirits and taxes were lowered on domestic spirits. More and more distilleries produced in backyards and only a few produced a high quality gin. This, combined with rampant overconsumption, led to the rise in deaths in London. Between 1729 and 1751, the eight laws (Gin Acts) were finally brought into being. The breakthrough was the law that prohibited distilleries to produce less than 1800 liters of pure alcohol. This paved the way for the brands we know today. Gordon’s began in 1769, Plymouth in 1791, Beefeater in 1820 and Tanqueray in 1830.

With the expansion of the Empire into India, malaria became a problem. The medicine tonic, which was taken to prevent the disease, was incredibly bitter due to the active ingredient quinine. To make it more drinkable, gin and usually a lemon were added. This created a legendary drink and the gin and tonic was born.

It was not until 2008 that the minimum production of 1800 liters prescribed in the Gin Act of 1751 was lifted. As a result, production of smaller batches of gin was possible again for the first time in more than 250 years. New gins entered the market, which also led to a shift in flavor boundaries.

We use for our Aviation a gin, which brings a long history with it and already played a role in the beginnings, when the Aviation was created. The Italian company Luxardo, which supplies us with the gin, has been producing since 1833. That gin brings notes of cardamom, bitter orange, cinnamon, angelica, licorice and, of course, juniper, which perfectly blend into the aviation.

Another essential ingredient is the Luxardo Italian Maraschino. This is a cherry liqueur with 32% alcohol content. It is made from Maraska cherry, a special sour cherry variety, which is smaller in size compared to traditional cherry varieties, has juicy flesh and a noticeable tart aroma. For production, Maraska cherries are soaked in alcohol and then macerated, or fermented in a mash and then distilled. The liqueur is aged in oak barrels for 2 years before bottling.
The pickled cherries are called Maraschino cherries and are popular garnishes for cocktail classics, such as the Whiskey Sour or the Manhattan.
The Ardent Batch No 5 Aviation is helped by the maraschino liqueur for its distinctive, fruity taste.
Créme de Violette, an essential building block of Aviation, is a violet flavored liqueur. The term “créme” refers to liqueurs with very high sugar content, which helps the spirit to have a creamy consistency.
In the early 1920s, Créme de Violette was an ingredient in many cocktails. However, in the second half of the 20th century, it was almost non-existent, as most liqueur manufacturers stopped producing it. Therefore, for a long time it disappeared in the recipe of the Aviation Cocktail.
Today it is used again in many cocktails and is indispensable in the bartending scene. It gives Ardent Batch No 5 Aviation its distinctive violet-blue color and light, floral flavor.
To give the final touch to the Aviation, we add a small amount of Supasawa. Originating from Belgium, this cocktail mixer is a tart blend of five different acids plus sugar, salt and distilled water. It is used as an alternative for fresh lemon or lime juice.
The Aviation Cocktail is a light, floral drink made with just four ingredients, but they are not easily reconciled.